here is a war raging in Ukraine but there is another war within the US progressive community, a messaging war over how coverage of the shooting war should play out.

Coverage of and commentary about the war by American progressive commentators can trend pretty Russia-friendly, that’s no mistake. There are a cadre of American progressives who have fairly close ties to Russia, take their cues from Russia and are conspicuously disciplined about staying on message.

The memes are familiar at this point. The US encouraged the Ukrainian resistance, the US does it too, (presumably what the Russians are doing), the US and the Ukrainians should be negotiating with Russia, Russia is being encircled and genuinely fears for its security and of course that any meaningful resistance to the Russian invasion of Ukraine risks, even invites nuclear war. There are subplots but those are the main talking points.

Our coverage, as many of our readers may now be aware has been quite a bit more open to and supportive of Ukrainian perspectives and more importantly, attuned to the suffering of the Ukrainian people. That’s not a mistake either. To begin it is important address the “America is responsible” argument on its own merits and as it relates to our coverage of the conflict.

To say that Ukrainian resistance to being invaded by Russia is the fault of NATO or America ignores the immense sacrifice the Ukrainians are making in their struggle for their homeland, their independence, their cultural heritage, their right to self determination and their very lives. That struggle is nothing short of legendary. It would be fairer to say, the Ukrainians are leading America and the West than being led by them.

In terms of RSN’s perspective when covering American foreign affairs, we have a long track record. Our DNA can be traced back to the early days of Truthout. Truthout launched shortly before the US invasion of Iraq. We were staunch opponents of that war and the misguided US aggression behind it. Truthout was perhaps the most consistent and effective critic of the war. We stood toe-to-toe with Bush administration officials and drew their ire for doing so. We have been consistently opposed to US colonialism, interventionism and war profiteering throughout our entire publishing history. “Military aggression is bad for humanity and bad for the earth.” That was our position then and it is our position today.

There are some significant similarities between the 2003 US invasion of Iraq and the 2022 Russian invasion of Ukraine. Both were totally illegal, totally immoral, utterly brutal and in each case highly detrimental to global security. The main difference in considering the Russian assault on Ukraine is the deliberate nature of the war crimes being committed against innocent civilians and the scope of the atrocities. The US did commit atrocities against Iraqi civilians but the sheer volume of Russian atrocities in Ukraine is unparalleled in modern times.

Not since World War II has the world seen the scope of destruction we are seeing in Ukraine. A major component of the Russian strategy in their war on Ukraine is the direct, highly intentional targeting of civilian infrastructure and civilians themselves. The Russians see this targeting as helping to achieve their war objectives. The objective being to subjugate Ukraine to Russian domination. The scope is unimaginable. City after city flattened, reduced to rubble, it is Fallujah, Aleppo or Grozny multiplied a hundred times. From the perspective of RSN’s coverage, in 22 years of covering war zones around the world we have never seen a conflict where the impact on civilians and civilian infrastructure came anywhere rivaling what we are seeing in Ukraine. 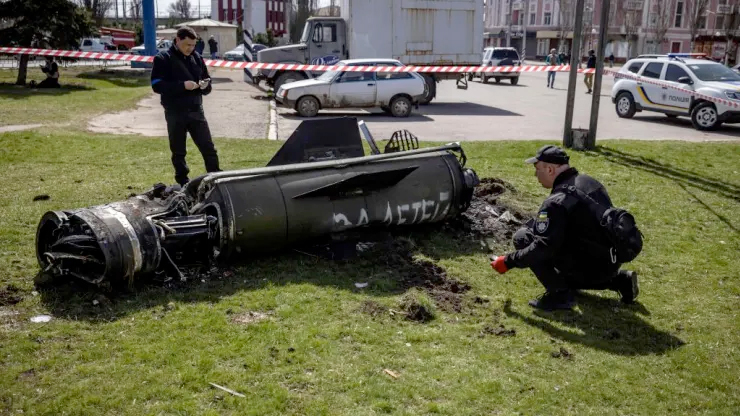 April 8, 2022: Russian forces launched an attack on the Kramatorsk train station in eastern Ukraine crowded with Ukrainian civilians trying to flee the war zone. On the side of the missile were the words, “For the children.” In all 59 people died, 7 were children. (photo: Fadel Senna/AFP)

The purpose of intentional civilian slaughter is terrorism in its purest form. The Russians are losing on the battlefield and what they are saying to the Ukrainian fighters is, if we cannot beat you militarily we will simply destroy your communities and kill your families.

By Russian estimates over 1.2 million Ukrainian civilians men, women and children have been “evacuated” from Ukraine to Russia to what Russians are calling, “filtration camps.” Not since literally the roundup and deportation of European Jews and other groups to Nazi concentration-extermination camps during World War II has the world seen anything like this. It is a humanitarian catastrophe of unimaginable proportions and it is mounting by the hour.

This does not even take into consideration the enormous impact the war is having on global food security in nations dependent upon crops grown in Ukraine. In all likelihood the impacts of this war would bring about the deaths of millions worldwide from starvation if allowed to continue. Even if it stopped today the disruption of food supplies has already accelerated to a critical level, and the impacts of food shortages are already being felt.

There are a number of geo-political plots and theories swirling around who is to blame for this war. From our perspective Russia invaded Ukraine and Russia is causing the horrific effects on the Ukrainian civil population. Our coverage will focus on the plight of the civilians being subjected to this horror. We are inspired by the indomitable spirit of the Ukrainian people who are suffering unimaginable loss, with an eye to their physical and spiritual survival.


Marc Ash is the founder and former Executive Director of Truthout, and is now founder and Editor of Reader Supported News.